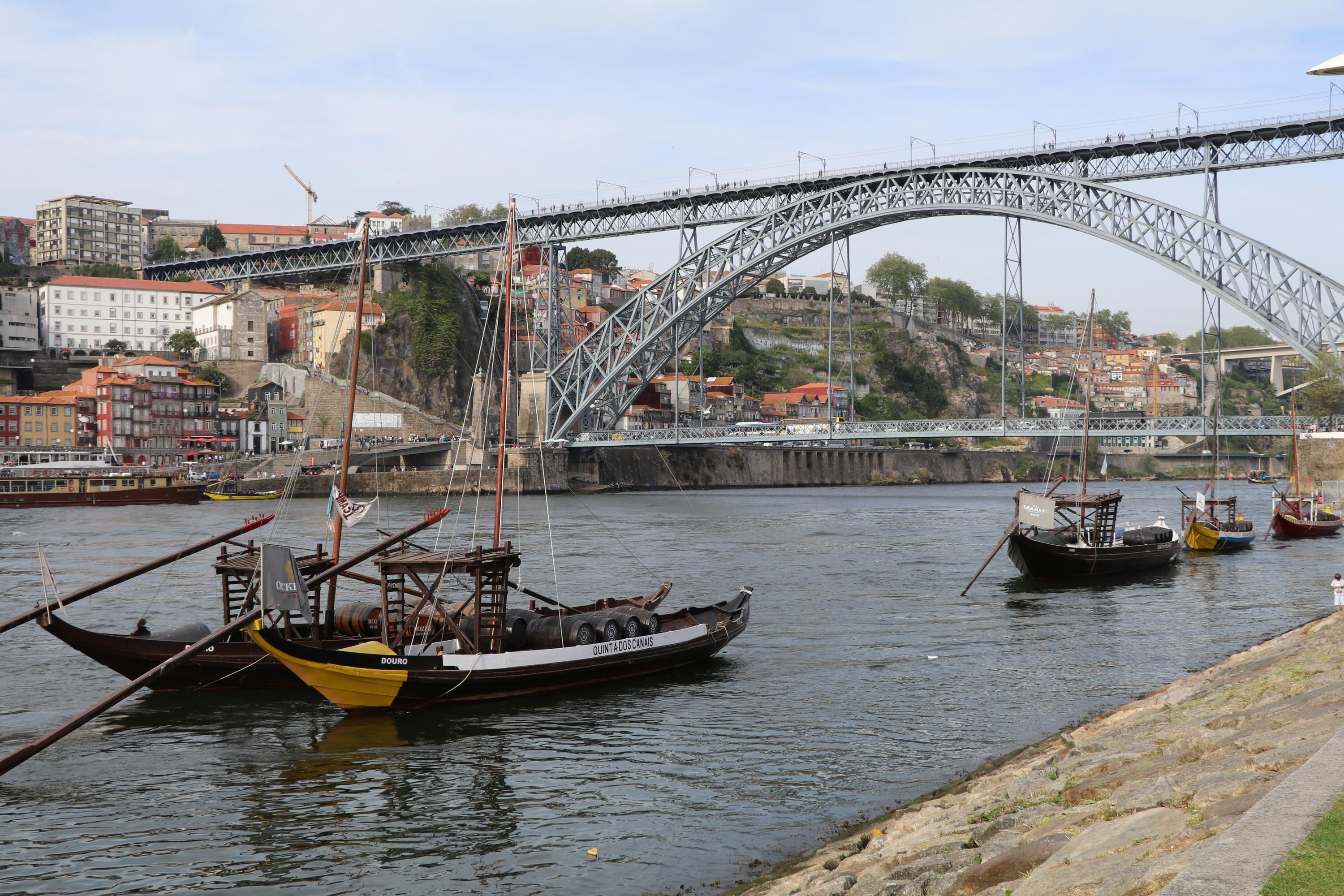 The bridge Dom Luis I crosses the Douro River and allows traffic on two levels. The bridge is 72 meters high, built of iron, and was finished in 1886 - Spring 2017.

Porto or Oporto is Portugal's second largest city with a population of approx. 250,000 and is for the most part best known for port wines and football - FC Porto, but it is much more than that. The beautiful city located on the river Doura and the whole area by the river is today on the UNESCO World Heritage List and for obvious reasons.
You can fly directly to Porto from many countries, but you can also take the train from Lisbon, if you are on vacationing in the Portuguese capital. The high-speed train connects Portugal from north to south and a trip from Lisbon to Porto is relatively quick. The distance is approx. 330 km. and it takes about 2 hours with the fast Alfa Pendular train. The train is well equipped and offers modern comforts on board all the way from Porto to Lisbon. Every day, more than 5 high-speed trains depart from Lisbon's Oriente Station to Campanha Station in Porto - both stations are easily accessible by public transport. The price for a single ticket is approx. 20 Euros in 1st class and it must be said to be touchingly cheap. 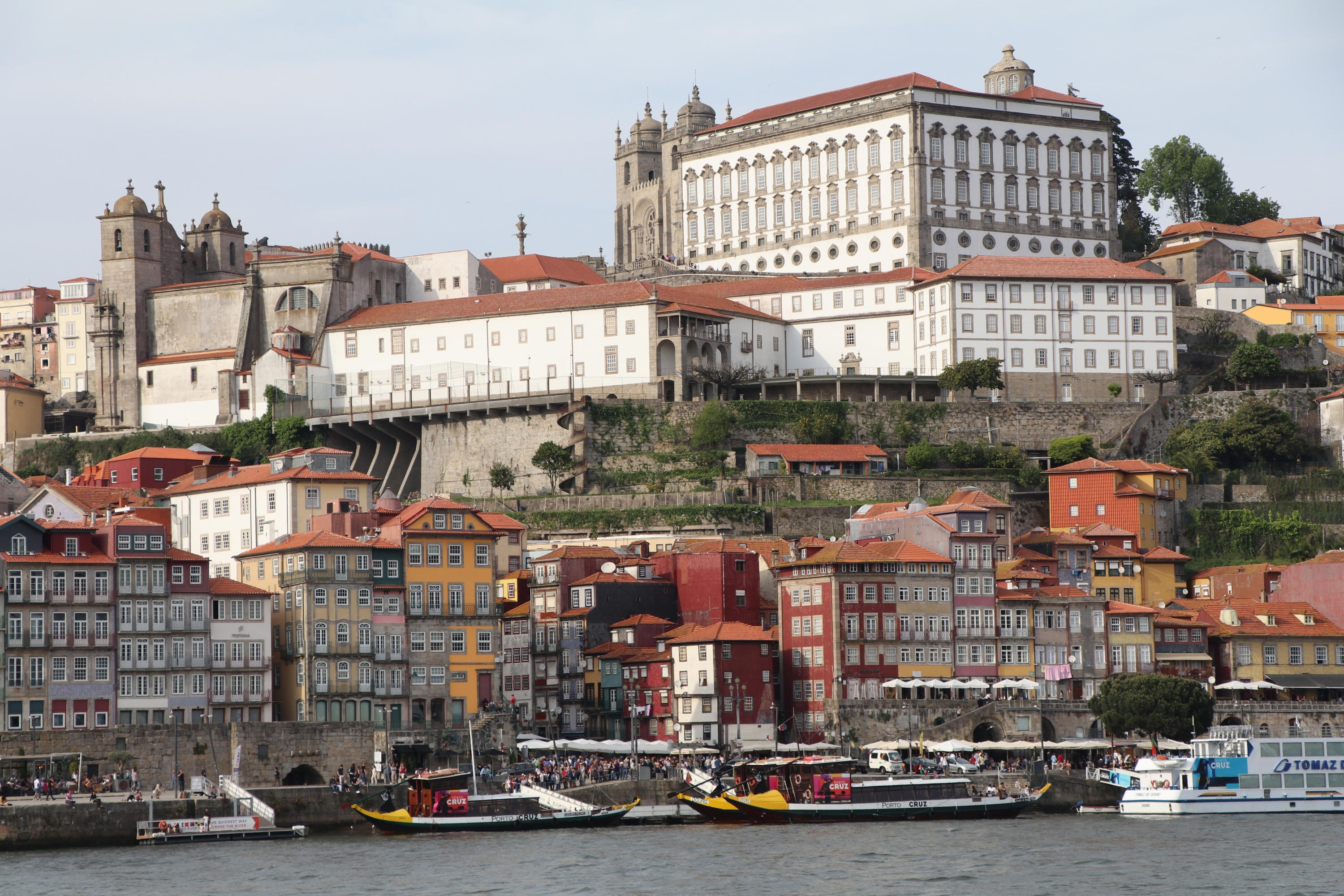 In the old days, port wine was sailed down the Douro River and on to England - Nowadays, boats are mostly used for tourists - Spring 2017

Porto has a lot to offer - lively streets, beautiful parks, countless museums and beautiful churches - but most people will probably find the area around the river most interesting. This is also where most tourists stay and the cafés and restaurants along the river are also used extensively. 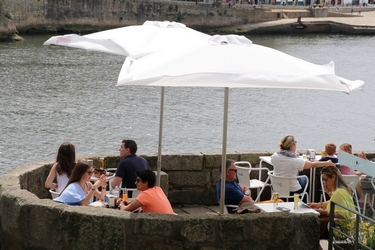 A restaurant by the Douro river - Spring 2017

Port wine also known as vinho do Porto is a wine that is produced in the Douro Valley in abundant quantities. The port wine dates from the late 17th century and was then rich in acid, very powerful and made without the use of brandy. Brandy was later added to the wine so that it could survive the journey down the Duoro River and on to England. Subsequently, it has been refined by English port wine houses into what we know today as port wine. 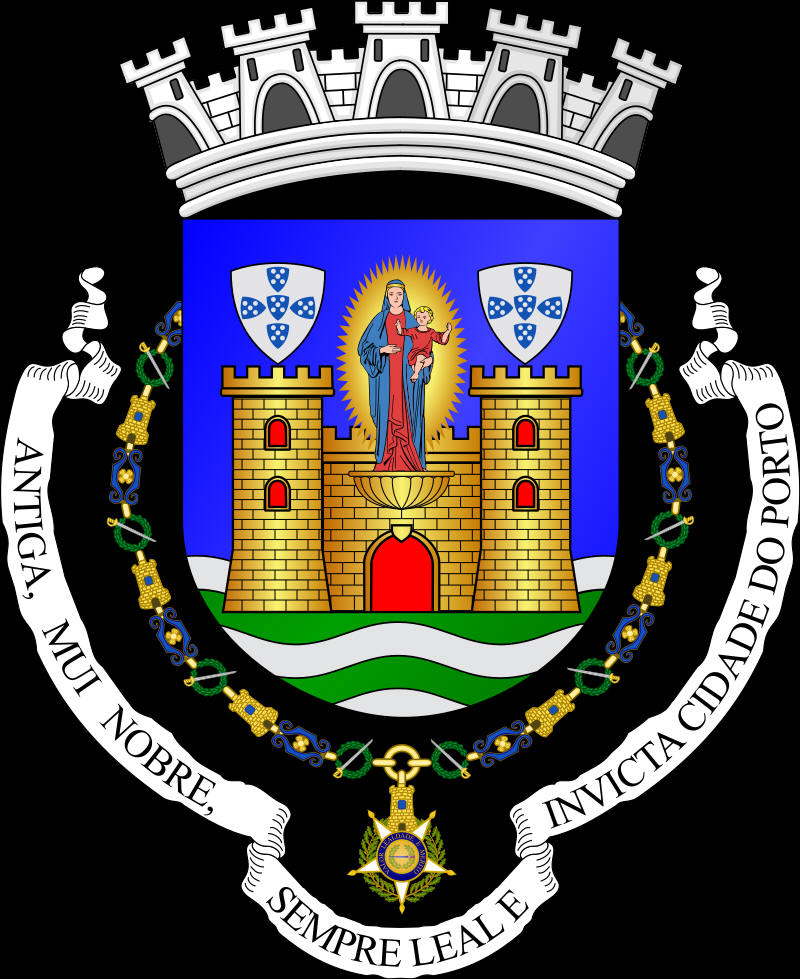 The profits from the wine trade and gold from Brazil abundantly filled the city's coffers in the 18th century. It was during this period that Porto got the look we know today. It grew far beyond the old defensive walls, and the city center shifted to Praca de Liberdade, a process involving the demolition of entire blocks of houses. Real palaces emerged as dwellings for the prosperous bourgeoisie. Even churches and monasteries were built to the taste of the time. 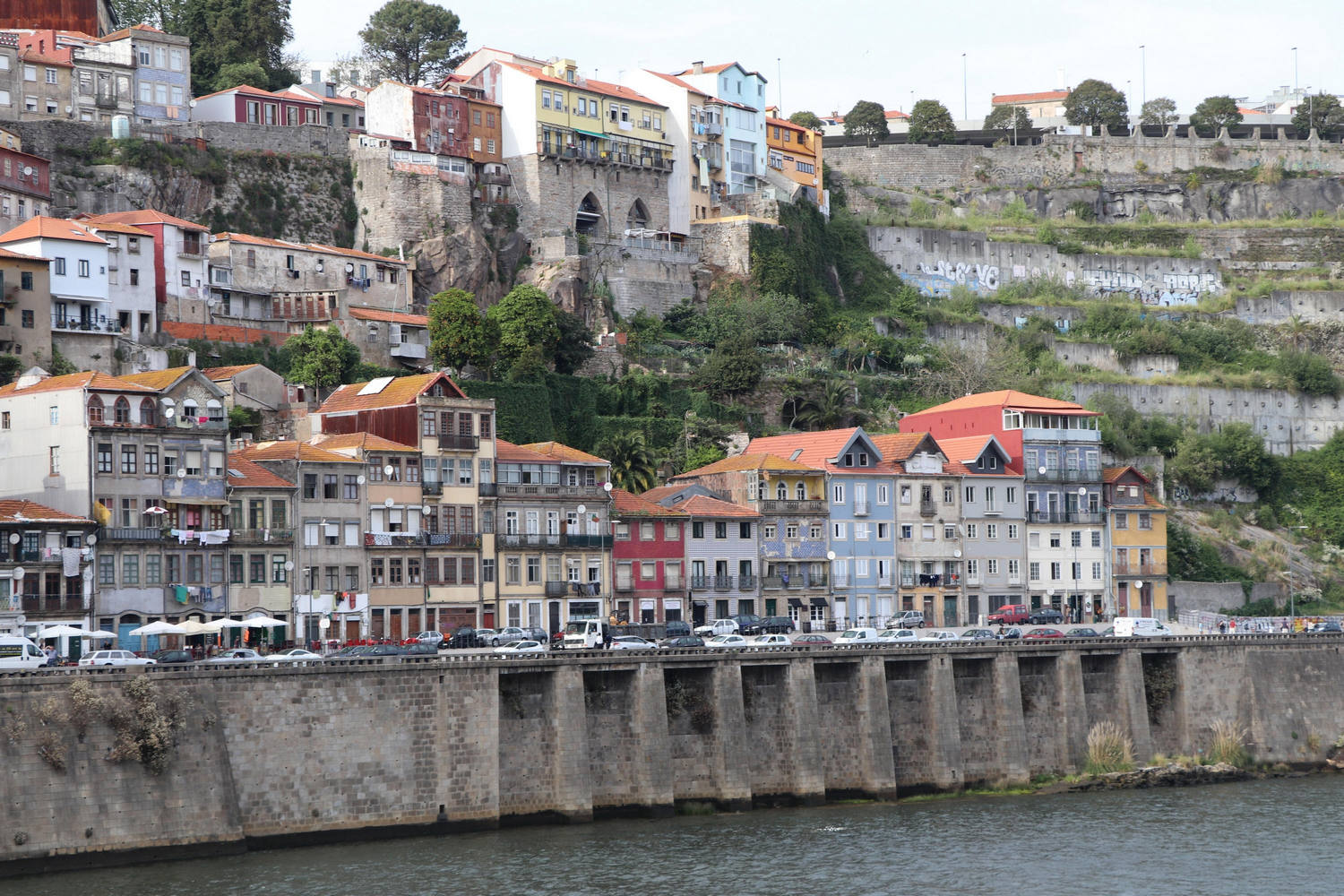 Although Porto is one of the richest cities in Portugal, the decay is often clearly seen in the cityscape - Spring 2017

Porto is located on the Douro estuary in northern Portugal and is one of the oldest European centers. The historical area can be dated many centuries back as it was an outpost to the Roman Empire. The city's combined Celtic-Latin name, Portus Cale, is the origin of the name Portugal. 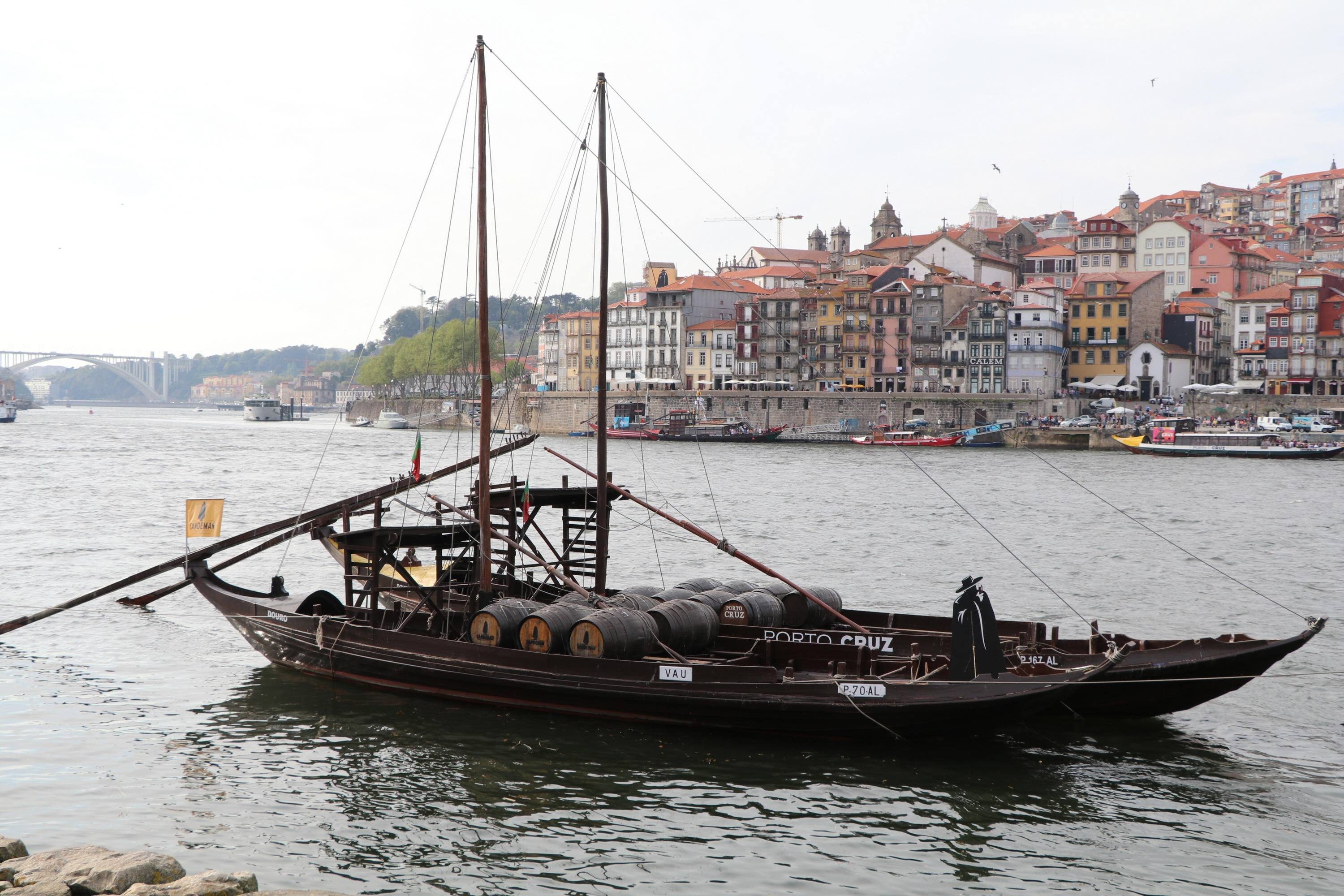 A beautiful port wine boat from the company Sandeman - Spring 2017 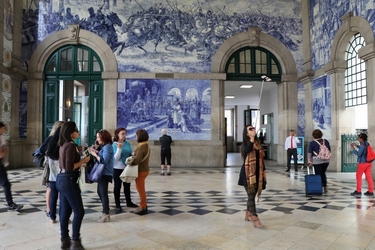 Approx. 20,000 Portuguese tiles, azulejos, have been used to tell the story of Portugal and to decorate the walls of Sao Bento - Porto railway station. The beautiful railway station from 1893 by architect José Marques da Silva, is a former convent, Mosteiro de São Bento de Avé-Maria, which was converted into a station building. 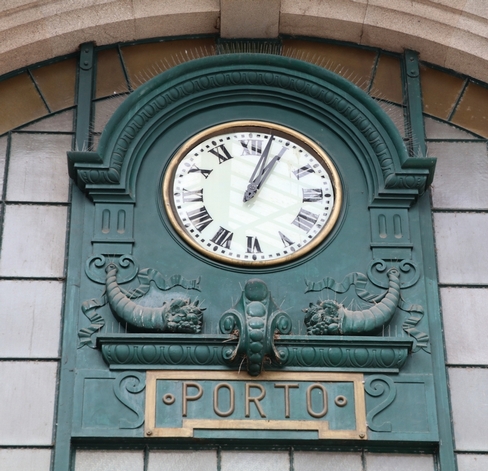 The old pendulum clock by near the platforms - Spring 2017 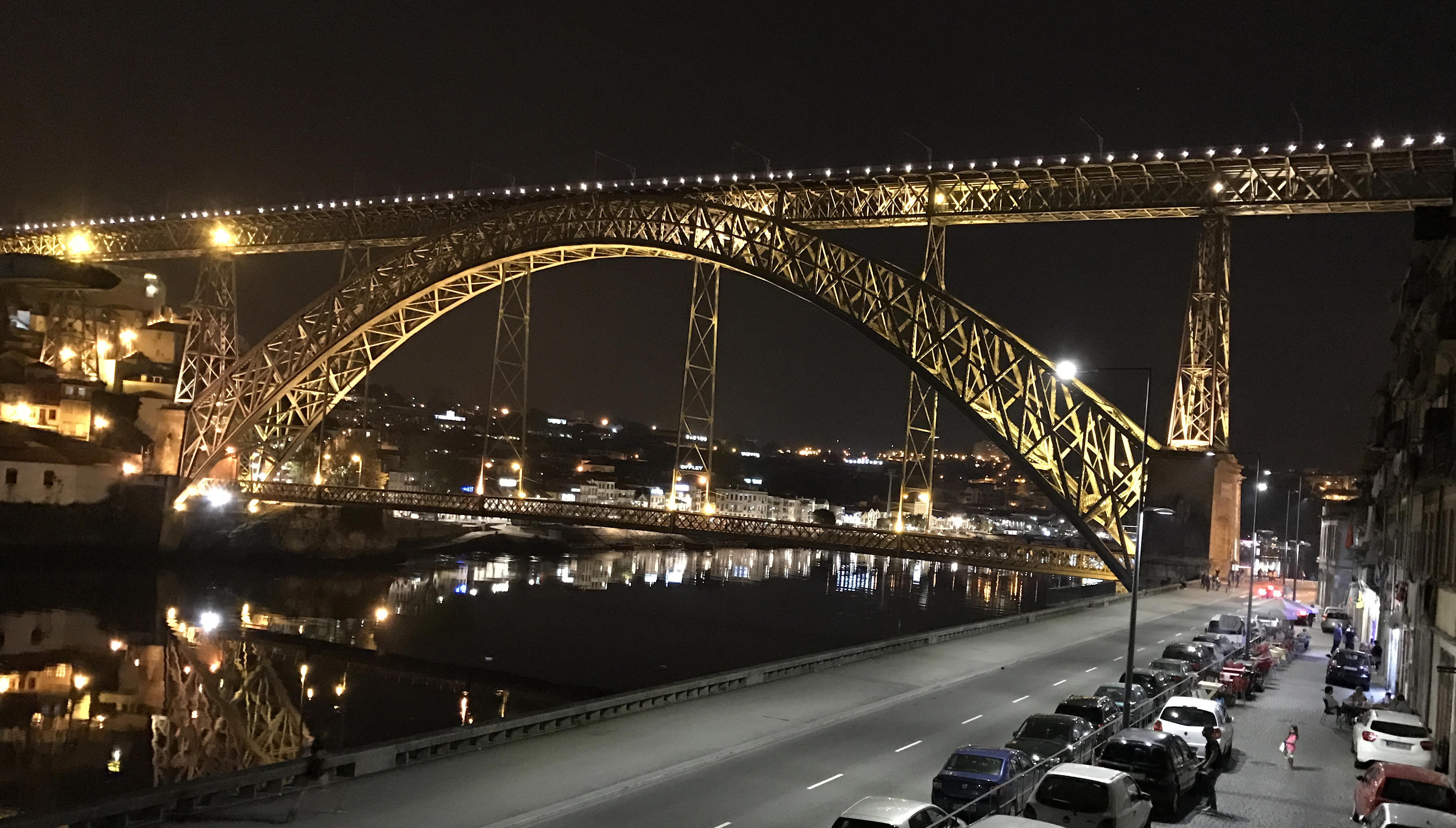 Dom Luis I by night

Construction of the Dom Luis I Bridge in Porto began in 1881 and was completed in 1886. Ponte Luis I replaced another bridge that had been located there before. The architect behind the Luis I bridge was Théophile Seyrig, who took as his starting point the bridge “D. Maria Pia ”. The Dona Maria Pia Bridge was built years before by the famous Gustave Eiffel, and Théophile was his partner at the time.
Both bridges were named after the King of Portugal, Luis I, and his wife Maria Pia of Savoy.