Lisbon - Portugal's charming capital - is built on and around seven hills just like Rome. The city itself is estimated to have approx. 560,000 inhabitants (Barrio Alto, Chiado, Alfama, Castelo, Craca, Baixa and Rossio), but if one includes the suburbs, it is estimated that the population will reach approx. 2.5 million. The most famous of the hills is called Alfarma, and it is here you can find the castle Castello de Sao Jorge. From the castle there are an excellent view of the Tagus River and the city's red roofs. 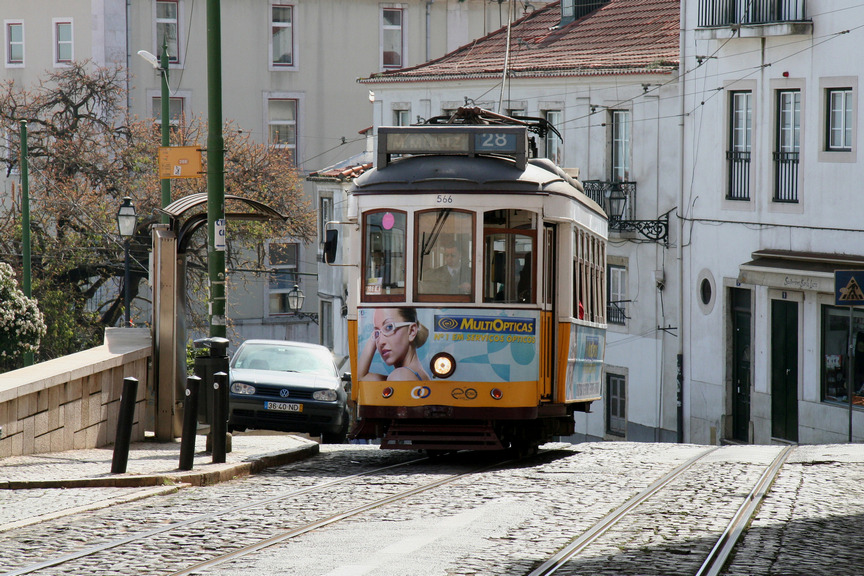 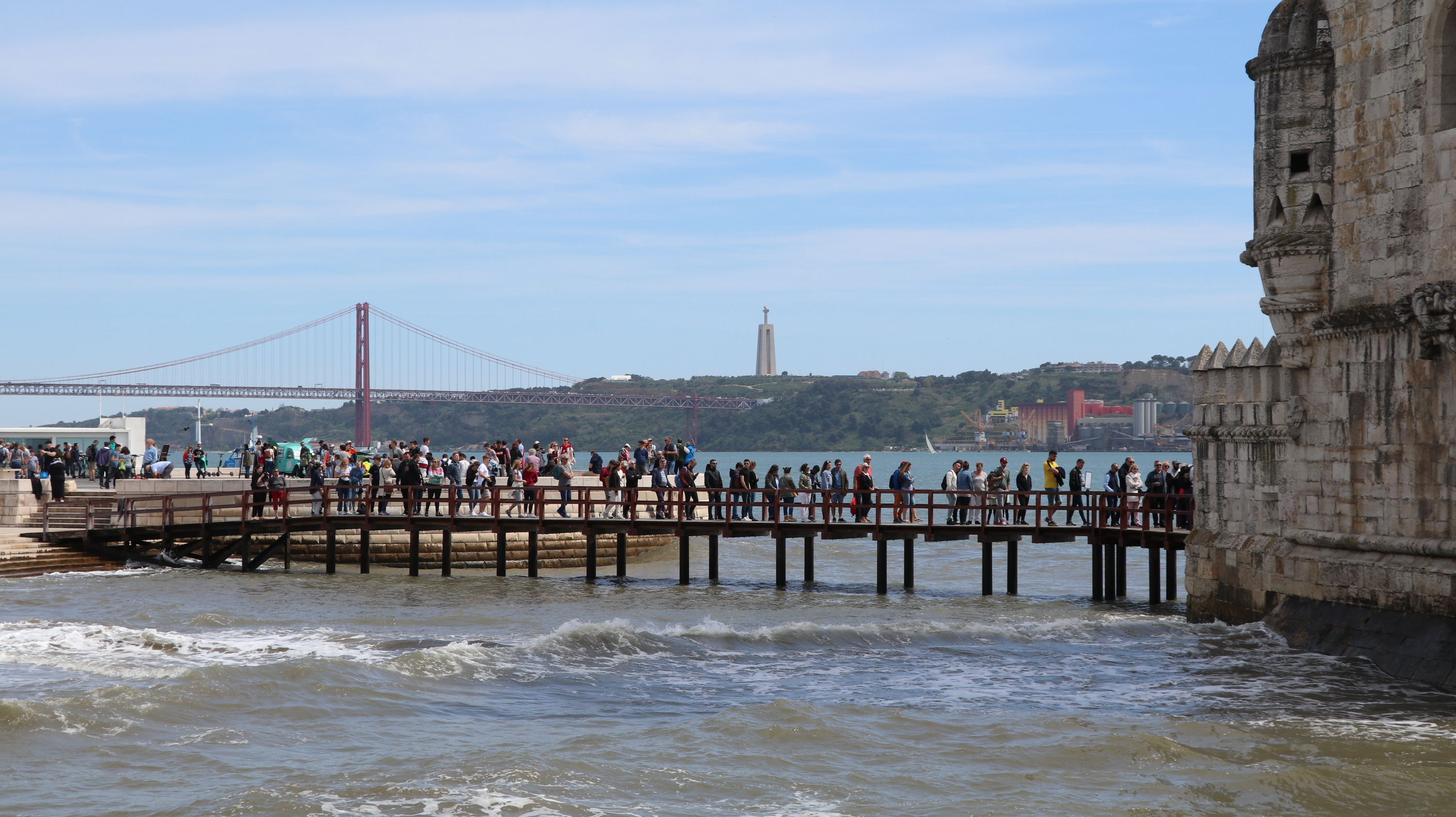 Ponte Abril 25 bridge, the Cristo Rei statue and the footbridge to the Belém Tower at the entrance to Lisbon from the Atlantic Ocean and up the Tagus River - Spring 2019

When you come by sea from the Atlantic to sail to the beautiful capital of Portugal, you have to go up through the Tagus River and past the Belém tower, which was erected in memory of the great seafarer Vasco da Gama, but which also aimed to secure the city counter attack. Shortly afterwards, you sail under the bridge, which is now called the Abril 25 bridge in memory of the Carnation Revolution in 1974, but which until then was called Ponte Salazar after the overthrown dictator, António de Oliveira Salazar. The bridge is often compared to the Golden Gate Bridge in San Francisco, but has pretty much only the color in common with this one. 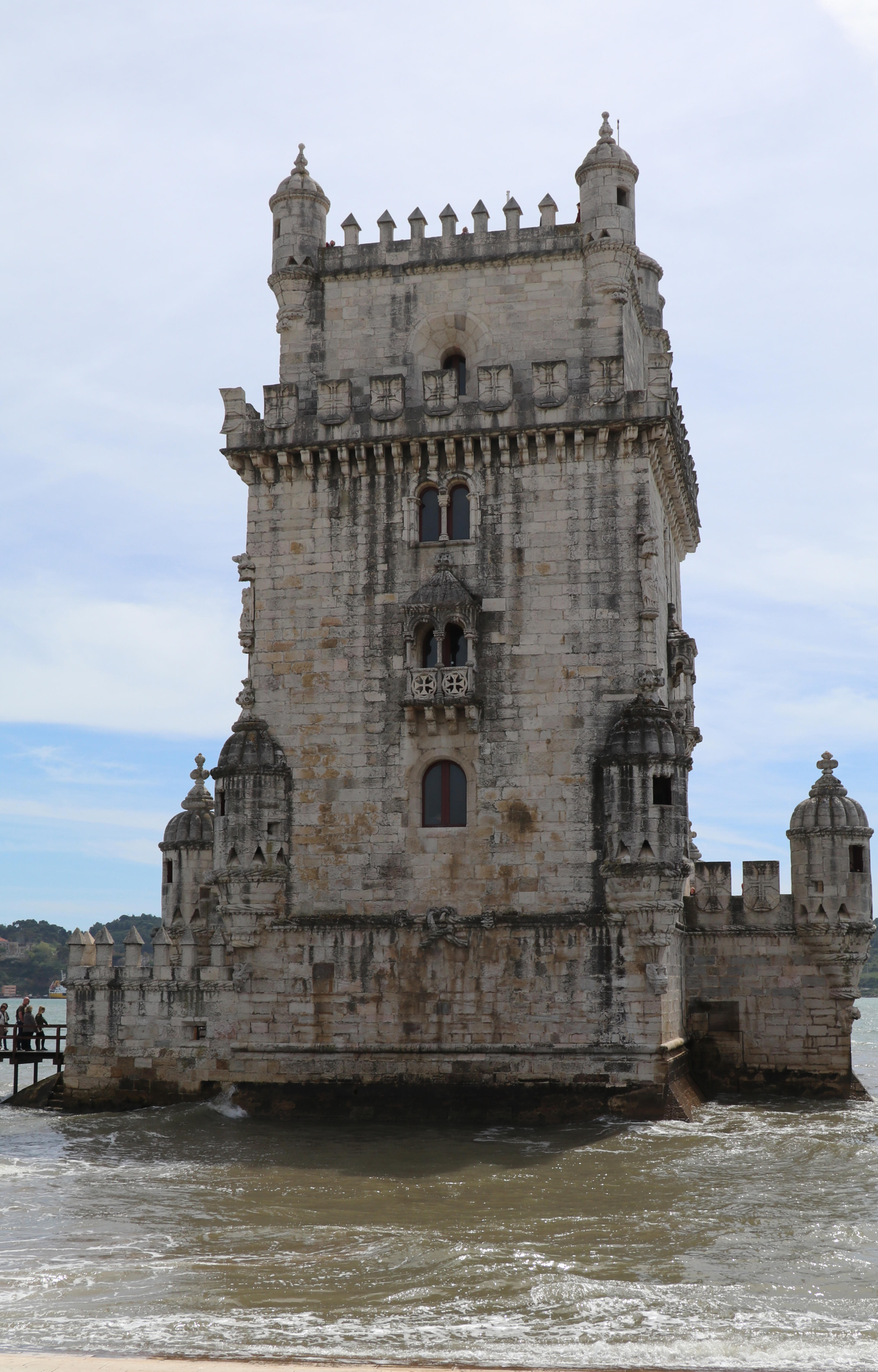 When the Belém Tower was built in the early 16th century, it was placed in the middle of the river to better defend the entrance to the capital. The river has subsequently changed over the years, which has meant that it is now quite close to the northern bank.
After the bridge you pass Cristo Rei, who is inspired by the figure of Christ in Rio de Janeiro in Brazil. The figure was erected after the war to thank God for avoiding being involved in World War II. 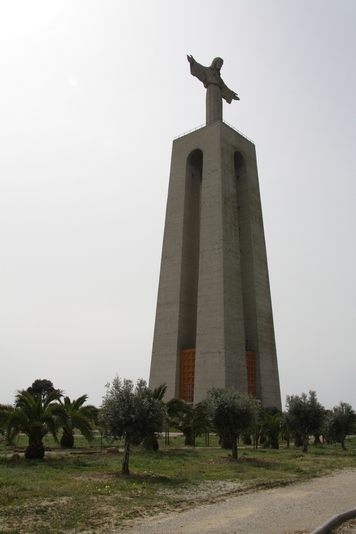 Shortly after Christo Rei you can see the rebuilt Praça do Comércio square with the statue of King José I, which reigns from 1750 - 1777. After the earthquake disaster in 1755, the square and the entire Baxia district were rebuilt by one of the city's famous sons, the Marquis of Pombal, which had the street structure rebuilt in the area so that it no longer was a fire trap. The streets became wide and winding in contrast to the building anarchy that had previously prevailed, where construction was just dense and more or less random. 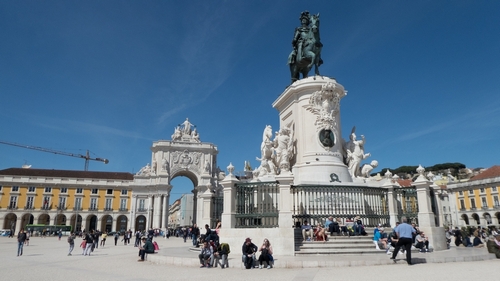 There are three things to always keep in mind when visiting Lisbon that have meant a great deal to the Portuguese in modern times, and that is the earthquake of 1755, the reign of dictator Salazar from 1932-1968 and the colonial wars. The earthquake is considered one of the greatest natural disasters in European history, and it largely destroyed Lisbon. Dictator Salazar was behind the infamous state security police PIDE, which was tasked with tracking down and pacifying political opponents of the regime. Moreover, he was also against the independence of the Portuguese colonies, and for the same reason he threw the country into some very long, bloody and economically exhausting wars, which Portugal lost. It was also Salazar who ensured that higher education was for the rich elite and not for the poor - And for the same reason, the majority of the population only received 6 years of schooling. 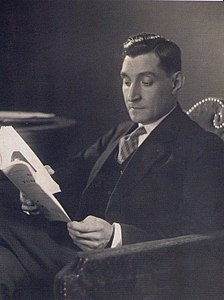 The protracted and grueling colonial wars that continually drained the treasury of money and the population's lack of education have meant that the country belongs to one of Western Europe's poorest. Pulling up a population that has been held tightly in poverty and "ignorance" is quite demanding and although Portugal experienced an economic recovery upon accession to the EU, it has unfortunately failed to maintain it. 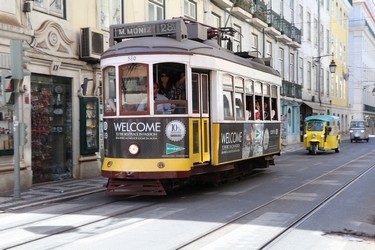 The old trams are part of the charm of Lisbon, but the public transport system - and here I am not thinking of the metro - is no longer up-to-date and adequate, and that is because the trams are primarily occupied by tourists. When I started coming to Lisbon in the 90's, it was still possible for the city's senior citizens to use these means of transport - And should there be a shortage of seats, one naturally got up and offered one's place as the most natural thing in the world, but now they can not even get on the trams for all the tourists push themselves forward in the queue to secure the available seats. Attempts have been made to solve this problem by offering red trams to tourists, but since they are neither original nor equally cheap, it is no wonder that tourists prefer the originals to a much greater extent. 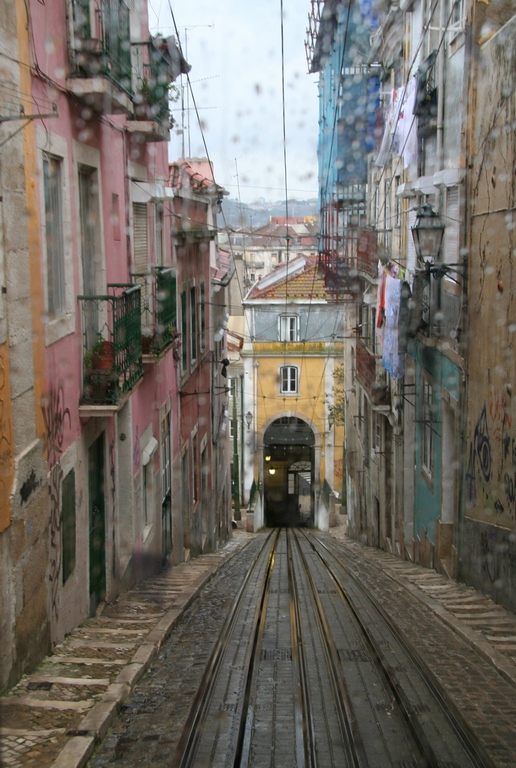 Something quite unique - now we are at trams - are the so-called inclined ones, which are quite special to the city. There are three - Elevador da Bica, Elevador do Lavra and probably the most famous, Elevador da Gloria. They drag themselves up and down on three of the seven hills Lisbon is built around. 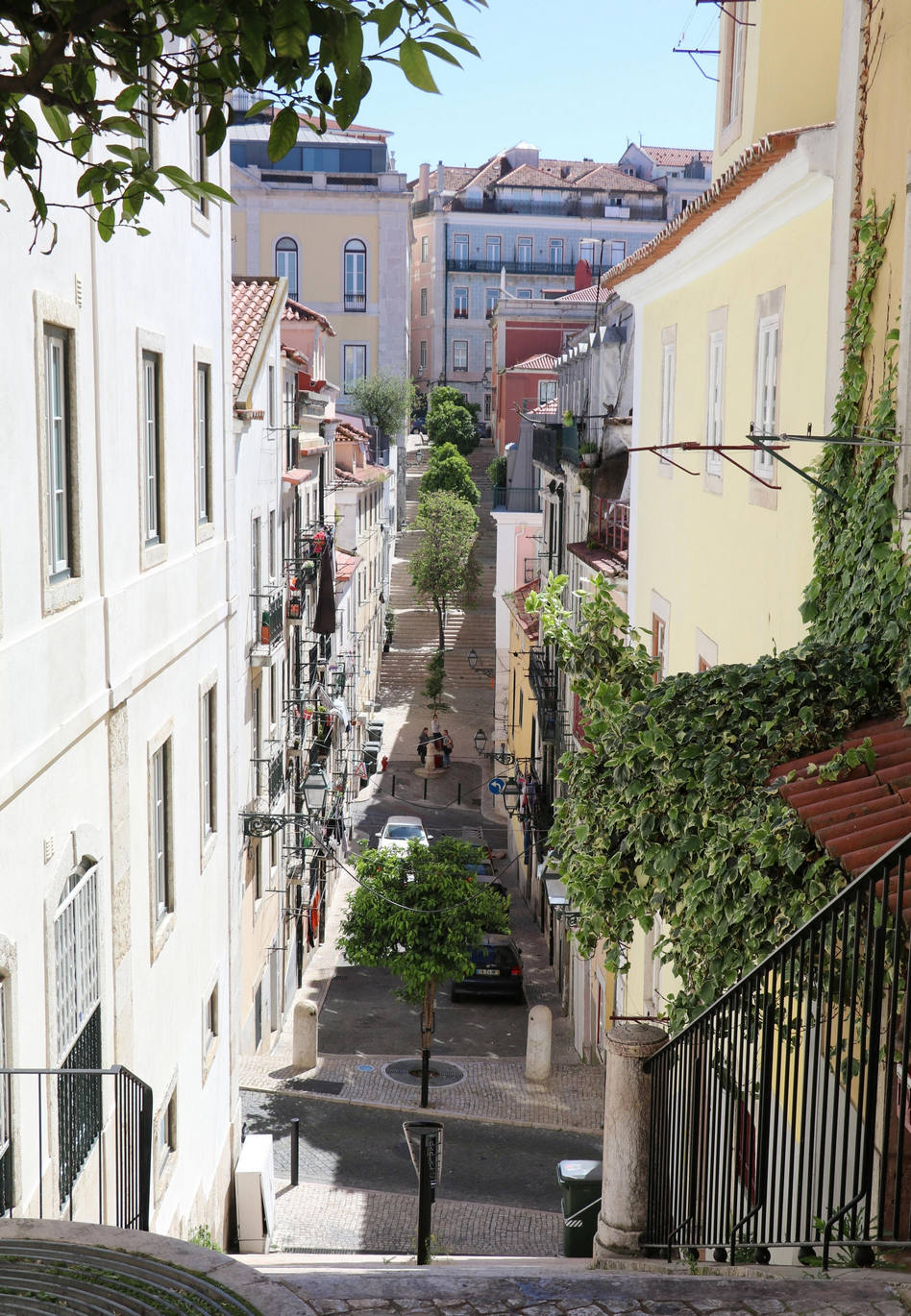 The picture illustrates quite clearly why it is so important, especially for the elderly, to be able to make use of the public transport in Lisbon, if there are any - Spring 2017

Of course, mass tourism has also left its mark on Lisbon, as in all other European cities, where in the high season (and it is long in Lisbon) it is almost impossible for the citizens to use public transport except the metro, as they almost all is "seized" by tourists driving around in the city. Especially the trams - inclined as well as straight - are constantly crowded. In addition to us easily recognizable pale tourists, there are also approx. a small mio. or 1/3 of the population, descended from the former colonies, which fill up the cityscape. 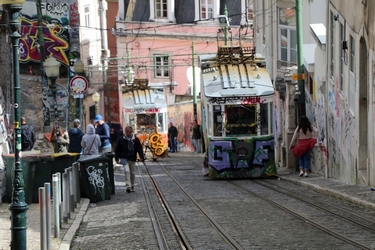 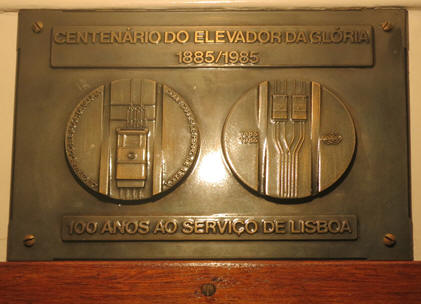 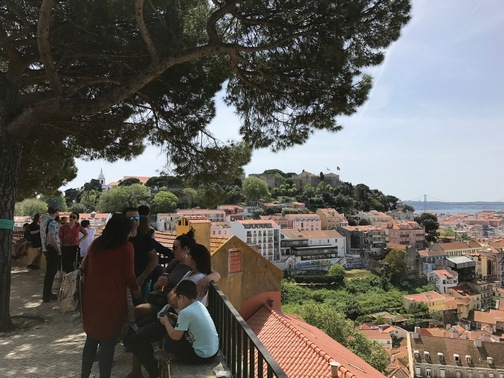 I have visited Lisbon for a little over 30 years and have been there quite a few times throughout the years, but mostly in recent years, where I typically spends a week or so in the city at the end of April, when the leaves just have sprouted out on Av. en Liberdade, which is somewhat similar to Ku'dam in Berlin - but a slightly economically poorer version, but Lisbon is also a poor city just like the country Portugal, where there are large class differences just as there also are differences between "north and south" - They are richest up north - in the Porto area.
The grueling colonial wars have cost Portugal dearly and although the country for a short time recovered from EU accession, it has never really taken hold. However, the EU has more permanently contributed to e.g. that the level of hygiene has been raised. I remember before the EU came into the picture, I sow how they dragged half pigs along the sidewalks from the trucks and to the shops and how in a south-facing window they had decorated it with live giant crabs, which they had pulled threads through and then hung them up like pearls on a string and next to a gazelle shank with fur, tail and all. I also remember how the crabs emitted some huge foam bubbles in their death struggle in the backing sun of summer. I shall omit a further description, but just emphasize that this is no longer the case. 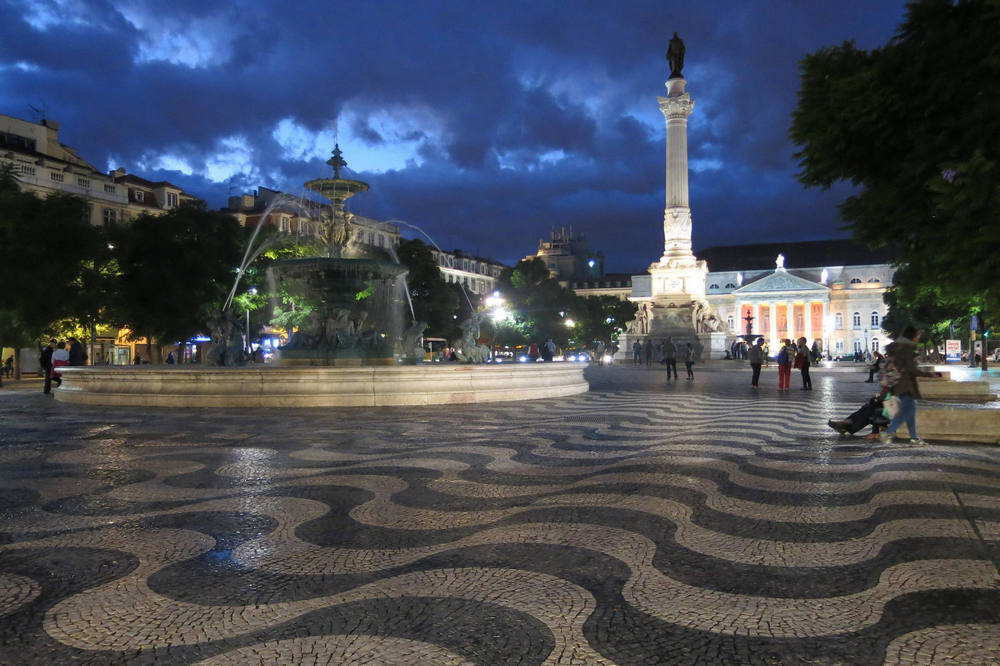 Most of the buildings around the beautiful square originate from the reconstruction after the great earthquake in Lisbon in 1755, only the Palace of Independence survived the catastrophic earthquake. The reconstruction of Rossio was completed in the second half of the 18th century by the architects Eugénio dos Santos and Carlos Mardel. 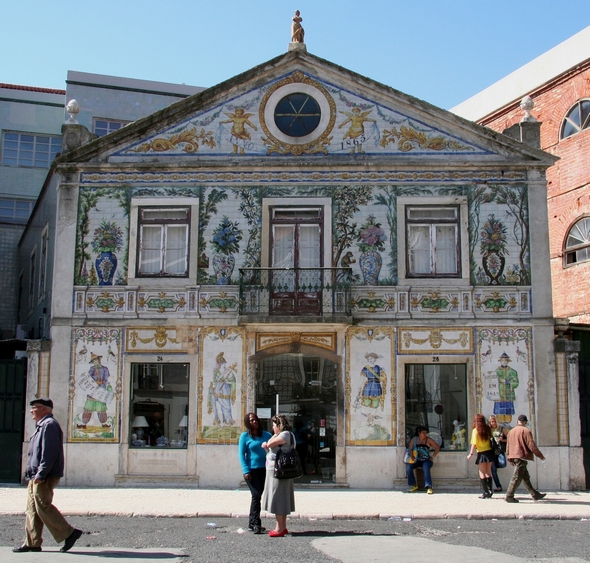 The beautiful tiles testify to a more glorious time - 2009 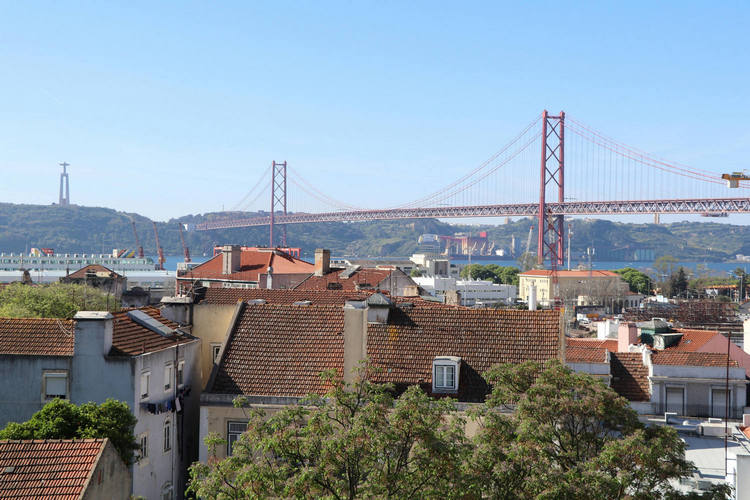 The castle, whose oldest parts can be dated back to the fifteenth century, has been continuously rebuilt and fortified. After the earthquake in 1755, the castle remained unused until the early 1930s, when it began to be renovated. There is not much to see on the castle itself, but there is an excellent restaurant where it can be recommended that you take a break and enjoy the excellent views. If you do not want to go all the way up there, you can with a little luck use tram no. 28, which is an experience in itself. 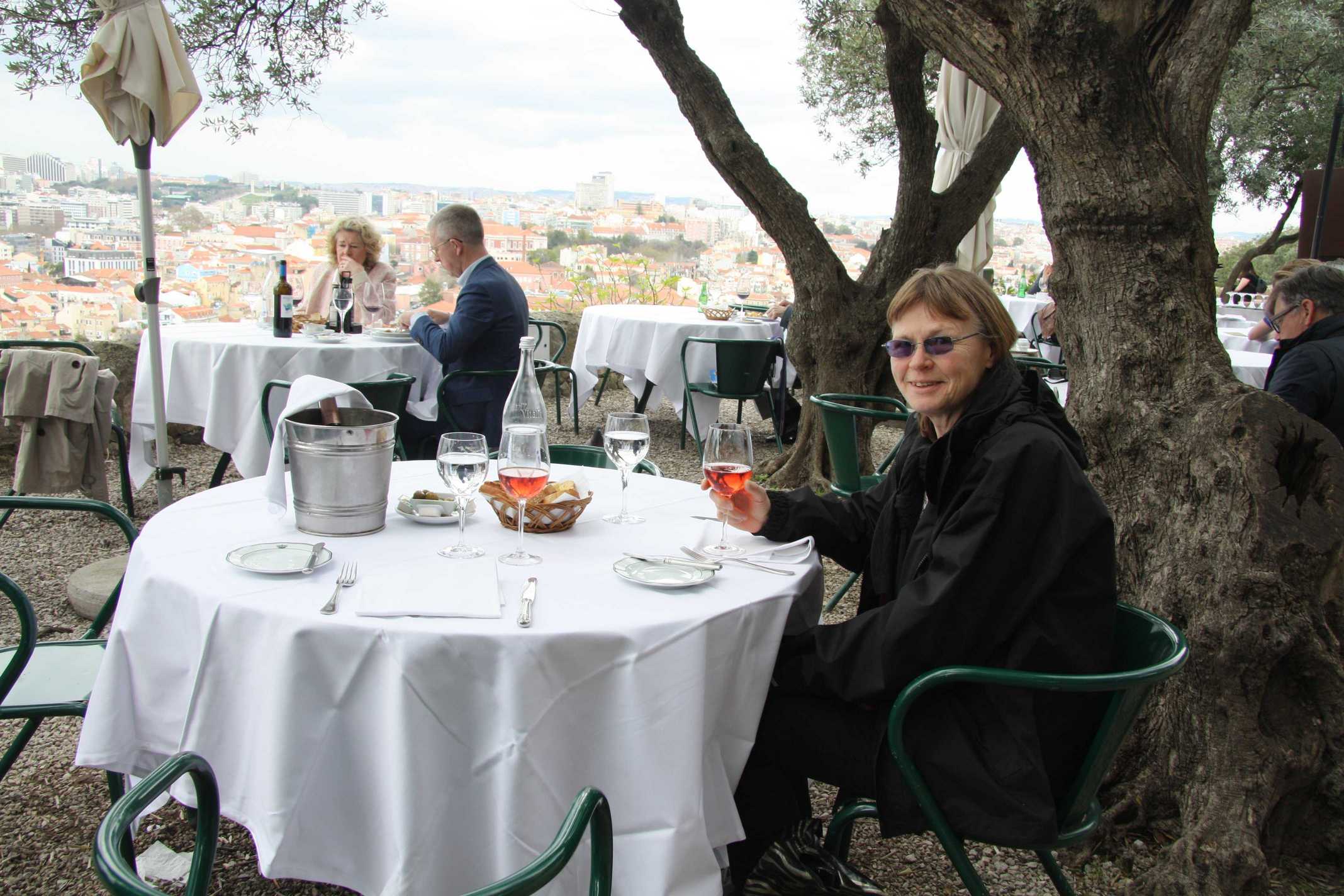 The restaurant - Restaurante Casa do Leão - is not one of the cheapest, as expected, but the food is excellent, the service is excellent and the view is excellent, so the money is well spent. 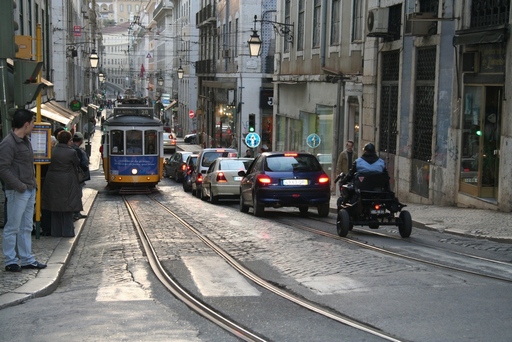 The traffic in Lisbon can be hectic and people drive both fast and close to you. For the same reason, it's a really good idea to keep an extra close eye before you just throw yourself into it. 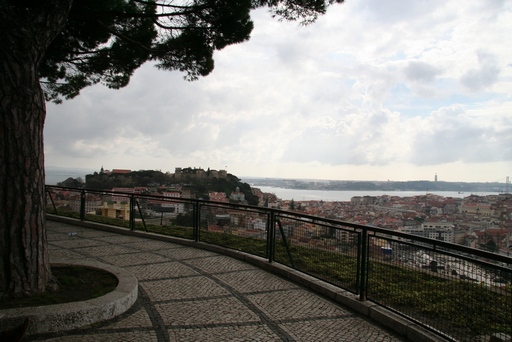 The most charming area of Lisbon's nightlife is Bairro Alto. The area, which during the day consists of cozy little business streets, is in the evening transformed into a hang-out place for thousands of locals and tourists. It is very lively and not just at the bars. You are welcome to take your drink out on the street and enjoy yourself with the guests from the neighboring bar. There are an incredible number of small, cunning places, and you can find music for every taste. Salsa is also popular in Bairro Alto, where the bars typically close at 4-5 in the morning.

Alfama in the eastern part of old Lisbon is also very popular as a walk-in-the-city place, although there are typically more people in the evening than in Bairrro Alto, which may well be crowded at the weekend. In both Bairro Alto and Alfama, the Portuguese blues "Fado" is sung in the many fado houses. 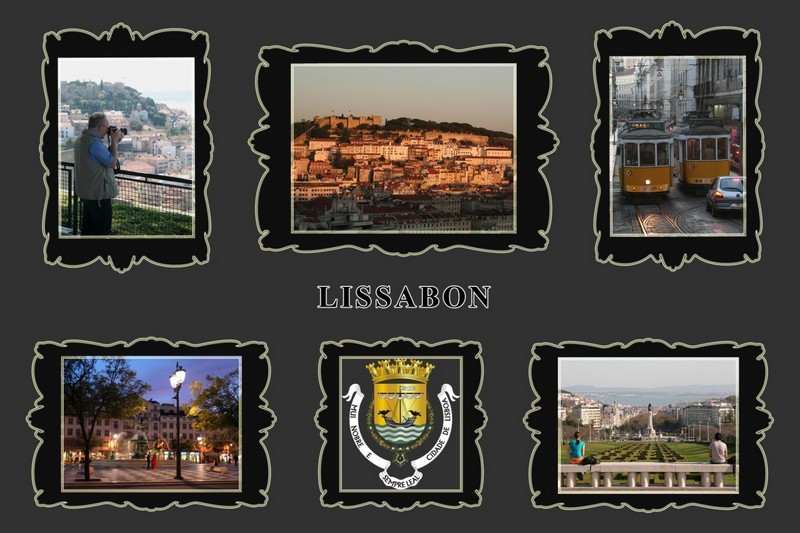 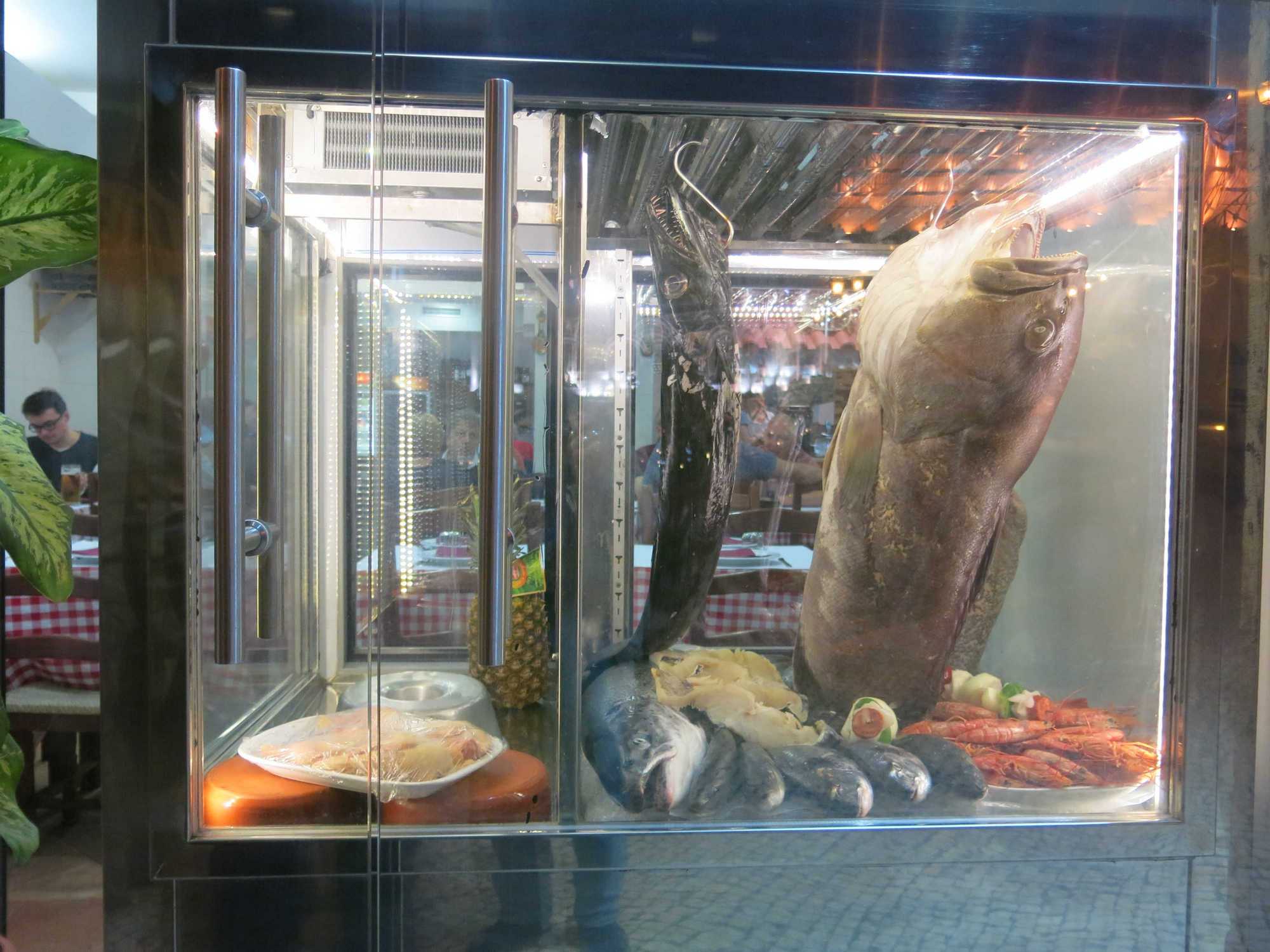 As Portugal is located on the Atlantic Ocean, it is only natural that "everything good from the sea" is an essential part of Lisbon cuisine and a fresh moray eel does not get in the way, although sardines are probably more preferred. 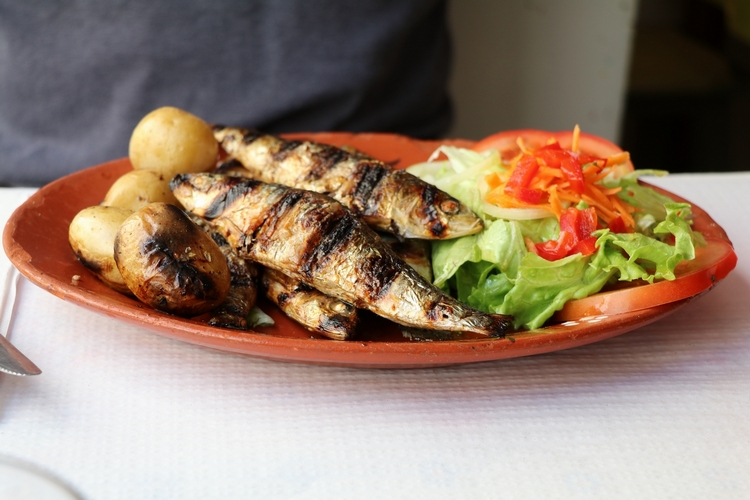 In the vicinity of Lisbon: